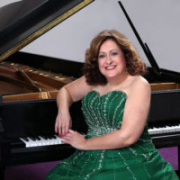 Dickson First UMC, 215 N. Main Street, Dickson, TN will present the first concert in a new concert series on Sunday, August 15th at 4pm. Dr. Diane Earle will present a piano concert and Chris Greene will be joining her to sing a couple of songs as well. The concert will feature wonderful piano arrangements of hymns, spirituals, sacred songs and classical pieces.

Dr. Earle is a renowned concert pianist who has toured and performed all of the world. Her biography and photo are listed below. There is no cost to attend the concert, but we will take up a love offering.

We hope you will make plans now to attend this great concert. For more information, please contact the church office at 615-446-2917.

Dr. Diane Earle has performed in sixteen countries, including three extensive China tours. She has also enjoyed many Europe concert tours, including multiple performances in Italy, Czech Republic, Great Britain, and others.  A newspaper in Wuxi, China, wrote:  “When the beautiful music notes cascaded from her fingertips, all the people in the audience were mesmerized.”

On the local/regional scene, Dr. Earle is Professor Emeritus of Music at Kentucky Wesleyan College, Music Director at Settle Memorial United Methodist Church, and principal pianist for the Owensboro Symphony Orchestra. As a Kentucky Arts Council Performing Arts on Tour Directory Artist, Diane was honored as Featured Artist in May and June of 2016, and KET produced a YouTube segment about her.  She was selected as Grand Marshal of the 2014 Owensboro Christmas Parade. Diane is featured on several CDs and DVDs, and plays approximately 200 local/regional performances each year.