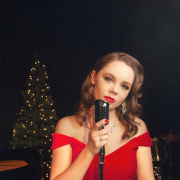 Certain to become a staple of countless Christmas and Holiday music collections for many years to come, More The Merrier, the 8-song holiday EP from pop artist and songwriter Sarah Reeves will fit perfectly alongside Bing and Nat and the Vince Guaraldi Trio. Featuring originals such as “More The Merrier” and “Sentimental,” plus fresh takes on classics including “Winter Wonderland (feat. Clark Beckham)” and “Go Tell It On The Mountain,” listeners are sure to experience all of the sounds and feelings the holidays have to offer or remind us of, from the lighthearted, jazzy fireside moments to the sacred. More The Merrier was produced and arranged by Ben Schofield and Mark Campbell.
Sarah signed her first record deal at age 18. For more than a decade, in addition to pursuing her own artistry, she has dedicated a vast portion of her career to writing songs for other artists and TV and film. Her music has appeared in Disney Plus and National Geographic’s six-part original series “Welcome To Earth,” starring Will Smith; Disney’s Raya and the Last Dragon international trailer; promos for “American Idol” and UFC; and on television series across major networks like ABC, NBC, CBS, FOX and Netflix, among others.
About More The Merrier, Reeves shares, “More the Merrier is quite possibly my favorite project of my career thus far. It is a timeless collection of Christmas songs both new and old that I hope you enjoy listening to as much as we enjoyed making it. I tapped into a side of my artistry that I’ve never known before, yet it felt natural and effortless. The energy in the studio was electric as we brought jazz musicians in to bring these songs to life. I hope you feel the magic, the joy, a touch of nostalgia and warmth this holiday season as you fill your home with these Christmas carols.”
Reeves has also been featured on tracks by high-profile DJs, including Gattüso, Laidback Luke, Justice Skolnik, R3HAB, and Armin Van Buuren. Having amassed more than 53.3 million career on-demand streams, the Curb | Word Entertainment artist has garnered 24.6 million Pandora lifetime streams and over 37.5 million YouTube views to date.
This concert will be held in the Christian Life Center at Dickson First United Methodist Church on Saturday, December 4th at 7:00pm. The concert is free to attend, but a love offering will be collected.
https://www.dicksonfumc.org/wp-content/uploads/2021/11/256298456_4618098448229188_6750676240286835951_n.jpg 960 640 admin https://www.dicksonfumc.org/wp-content/uploads/2021/07/dfumctopic.png admin2021-11-11 15:22:202021-12-10 10:17:16Sarah Reeves Concert – More the Merrier
DFUMC Concert Series – Diane Earle